Look at the two photographs below; the first is of the stunningly attractive Ronda Rousey. The second is also Ronda Rousey; this is what a woman can look like after she has been beaten up. If a man did that, what would you call him? Yet when two women climb into a cage and do this to each other, it’s called sport. 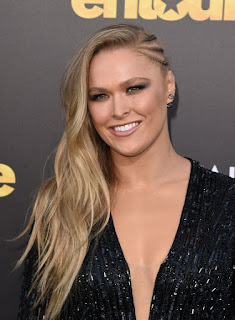 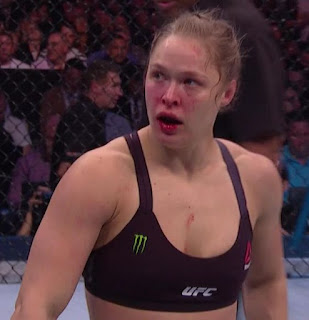 Ronda Rousey is, or perhaps that should be was, the rising star of women’s mixed martial arts until she was stopped in the second round by Holly Holm. A year and more later she suffered an even quicker defeat to Amanda Nunes. Will she now retire? Who knows? But if these women had any sense, they would all retire. Seriously, do you want to see young, attractive women with their faces mashed to a pulp? The women who beat Rousey aren’t exactly unattractive either; it would have been better for her but not for them if the boot had been on the other foot.

Of course, there is absolutely no reason women shouldn’t keep physically fit, train, run, compete on the field, and in the gym, indeed they should be encouraged to do so, but if they want to do contact sports, judo is both feminine and graceful, then there is aikido, karate, kung fu...Indeed, Rousey began as a jūdōka; she also became a wrestler - that’s another no-no, have you seen the injuries these guys and gals suffer, and how many of them die young?

Cool it ladies, leave boxing, mixed martial arts and other blood sports to the guys. A man with a beat up face can appear ruggedly handsome, and even a bloodied loser can attract compassion, but for you, a black eye, a busted lip, a mouthful of blood, all that does is rob you of your femininity, and that is something you want to keep as long as you can. You’ll be astonished how fast the years go by and how quickly it will fade.