The Real Cause Of “Anti-Semitism”

Way back in 1994 I wrote “The only problem of anti-Semitism is the anti-Semitism Jews themselves create”. Like the man said: plus ça change.

At the time of writing, two people in the UK – one extremely well-known, the other not so – are being persecuted by a powerful political lobby for daring to voice unpopular opinions. Ken Livingstone needs no introduction, nor do his views on Zionism. Alison Chabloz is a singer-songwriter who has dared to poke fun of shameless liars including Irene Zisblatt and the recently departed Elie Wiesel. Like the current writer she also believes the true extent of Jewish suffering in the Second World War to have been greatly exaggerated.

While the extent of Ken’s persecution is suspension from the Labour Party, an attempt is being made by the self-styled Campaign Against Antisemitism (their spelling) to drag Alison through the courts for performing satirical songs. Although she is no Lynsey de Paul, she certainly has talent, her song ‘‘‘Survivors’’’ purloins the melody of Hava Nagilah, but most of her work is entirely original, and includes songs that are neither controversial nor political. You can find her on YouTube.

Ken’s heresy is that like so many other self-styled anti-racists he equates Zionism with racism; the usual mantra is that the Israelis practise apartheid. Not entirely true, after all, the white supremacist South African Government never carried out acts of mass murder comparable with Operation Cast Lead or Operation Protective Edge. He has also claimed Hitler supported Zionism, although unlike Alison he is an uncritical believer in the 6 million. Did Hitler support Zionism? That is a complex issue, but what is not complex is the fact that the Nazis and the Zionists had the same goal – they both wanted Jews out of Germany.

Along with two anti-Zionist rabbis, this goy has documented the cooperation between the Zionist movement and National Socialism, and I would refer you in the first instance to this pamphlet and this one. Back in the 1990s, I studied every issue of the Jewish Chronicle from well before untill well after the Nazi era; some of the things I found therein were incredible, like an editorial published October 25, 1935. On page 9 under the heading Scrap the Transfer Agreement! the reader is told the German Government was subsidising Jews, and the paper was not happy about it:

“These tainted German goods are often being sold...at...far below cost price, thanks to the German export bonus; and the infant industries of Palestine cannot compete with them. Worse still, the Transfer Agreement, by forcing Jewish merchants and commercial houses to buy or sell German products on pain of financial ruin, and at the same time offering substantial advantages for such practices, is...debasing the life of Palestinian Jewry”.

This is not the first time I have used the above quote, and it never ceases to amaze me; the paper claimed the Nazis were blackmailing the Jewish Agency. Seriously dude, blackmail is when you give money to the blackmailer. Would anyone reading this article prefer to pay a tariff than receive a subsidy?

Whatever Ken Livingstone thinks about Zionism, he has never been an anti-Semite and is still not one, even though in the past Organised Jewry has tried to drag him into court as they did when he published the cartoon below, a cartoon that depicts a mass murderer as a mass murderer. 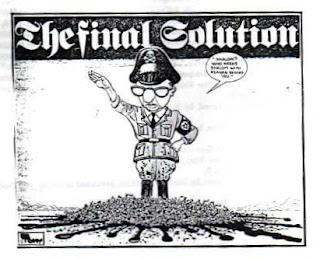 Having met Alison Chabloz I can say she is no anti-Semite either; laughing at Jewish liars is not akin to persecuting Jews. And who is doing the persecuting here? More to the point, let us assume they believe she is an anti-Semite, that she hates Jews, do they really believe that by dragging her into court, libelling her all over social media, and attacking her livelihood they will make her love them? At the time of writing, the website of this august organisation is boasting that Labour and Conservative candidates have been deselected in Birmingham for opining about Jewish conspiracies. The management board of the Campaign Against Antisemitism is made up of three Jews. A conspiracy is by definition a combination of persons for an unlawful or immoral purpose. By its persecution of Alison Chabloz, the Campaign Against Antisemitism has become a Jewish conspiracy, in my book at any rate. As for that bit about candidates being deselected for opining about Jewish conspiracies, I have only two words: Gerald Kaufman.