The Lunatics Have Killed Trafalgar Square

Last year was bad enough, the Square was fenced off and I saw in New Year’s Day standing under a statue just south of it; the dude’s name escapes me at the moment. This year I couldn’t even do that. I left home around 9pm and caught a bus, which I expected to be slow, certainly slower than the trains that weren’t running to London Bridge, but I was still there in more than good time.

Again, it was entirely boarded up and then some. I spent a good deal of time wandering around; best not to mention the copper who thought I was urinating outside Embankment Station – I was struggling with the seal on a flapjack packet – or the idiot who thought I was his Algerian uncle spouting nonsense as one of his female companions threw up over the westbound platform.

I saw in the New Year in Leicester Square then made my way towards Covent Garden to do my annual good deeds; I stopped at two rather than the usual six, wanting to get home, but the time the bus took to get from Charing Cross Road to Duncannon Street, I could have walked there and dispensed another four.

Posted by thedarkman at 14:08 No comments:

This Labour MP was hanging out with Graham Linehan and friends on YouTube yesterday. She had recently made some “transphobic” comments, ie implying that men are not women. At least one left wing moron has demanded she lose the whip.

So what does Rosie say on this hangout? She complains we are “losing out language” and is so concerned about “the words we use”. And she says she grew up knowing about “gay rights” and attended Pride lots of times. Yeah, she calls homosexuality gay. And Pride - seriously?

Not only that, she refers to illegal immigrants as asylum seekers. And this is the woman who says we are losing our language? Give me a break.

Posted by thedarkman at 14:48 No comments:

I first tackled this subject a decade ago, and have witnessed many strange things at the poker table since - including me winning on occasion! Nevertheless, what happened in the $300 Freeroll tonight was something special.

I was coasting, then a short stack went all-in and the dude in front of me called. I had pocket jacks, and followed. The all-in had jacks too, and the other guy had queens. I thought I was as good as out so shortly went all-in with suited connectors against a minimum raise. And flopped the nut straight. 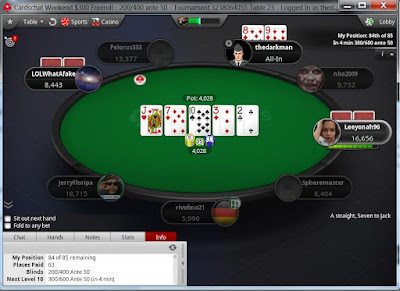 Three of us in the pot, the diamond on the turn didn’t bother me particularly, but I called “deuce of clubs” all the same. And it came. I cashed, then again short stacked I was all-in with almost the same suited connectors. When the ace flopped I knew I was doomed, then the seven hit the turn, and I called “Six!” 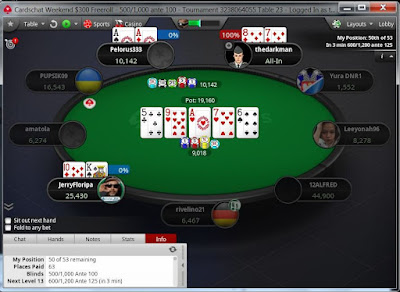 Amazing or what? The straight saw me through to the next level. Give it a shot. Even if you are an atheist like me.
Posted by thedarkman at 13:45 No comments:

I was on my way home in the dark, although it wasn’t so dark I couldn’t see the gun. There was a car parked near my house, and sitting in it were four young black dudes: two in the front, two in the back. One in the back was holding the gun, it was silver or silvery. I feared for a moment he was going to shoot the other guy, but he was simply showing it to him.

I can’t remember if I spoke to them, but I do remember taking out a pen and writing down the car registration number: B77 3701.

The next thing I remember, I was in the hall and four men were walking up the short path. They were all white, one was my neighbour of 26 years, the other three were drinking buddies, they were carrying bottles of beer. Nothing unusual about that, I thought. I went upstairs, and the door to my apartment was ajar, the living room light on. I pushed the door open and confronted the low table, it was bare; someone had broken in and stolen my computer. It was then I realised my apartment doesn’t look like this, for one thing I don’t enter it by the living room door. Then I woke up.

I’ve had vivid or fairly vivid dreams like this before. The last one I had was of a plane crashing into a building 9/11 fashion. And?

I ran B77 3701 through Google. I realised it wasn’t a real vehicle registration number; I found out it was something for sale on eBay, something to do with fishing rods.

Dreams are junk. We have them all the time. Some we remember, most we forget. Let them go, the only dreams that mean anything are those you can chase in the real world.

Posted by thedarkman at 04:14 No comments:

Take a gander at the two hands below; they are both from the daily $2.20 pot limit knockout tournament on PokerStars yesterday, Bank Holiday Monday.

In the first, I would have made a royal flush; I called the initial raise but folded to a re-reraise. As soon as I saw the flop, I knew what would happen, but had I stayed in, it would have been poor value to call the turn when even if a heart that doesn’t pair the board comes, I still win only half the pot.

The second hand, from later, is almost a royal flush, but at least I got paid, although I should have bet a lot less on the river; nobody called. I cashed, taking a few bounties on the way, but should have finished a lot higher than I did.

What do you think are the chances of a repeat performance tonight?

Whatever, don’t give up the day job! 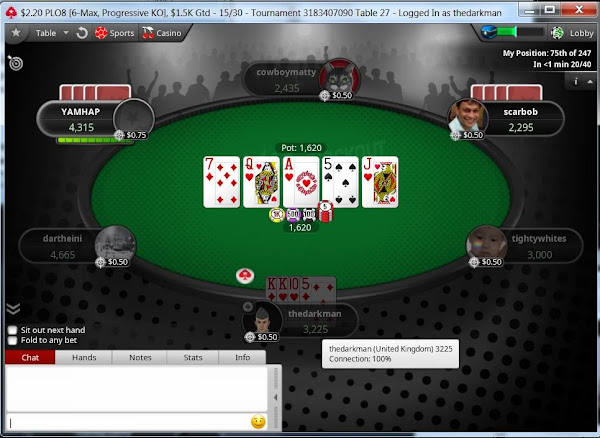 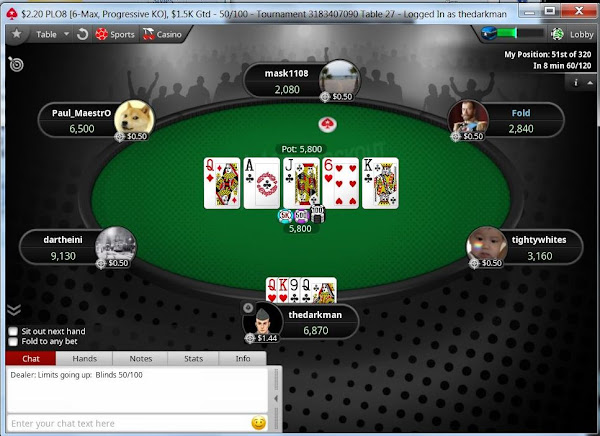 Posted by thedarkman at 05:38 No comments:

How Royal Can You Get?

The two screengrabs below are from micro-stakes pot limit Omaha played this evening on PokerStars.

In the first, Yours Truly folds a semi-garbage hand pre-flop. And look what he misses.

As far as I can remember, this is the first time I have seen two royal flushes in the same tournament, granted that the first was only a potential royal flush.

I play very little Omaha because it’s a lunatics game, Generally, hi-lo isn’t so bad as long as you keep you wits about you, and are prepared to fold top set on the flop on occasion.

How often do you flop a royal flush, even at Omaha? I kept the betting modest to ensure I got paid.

I also cashed, for what it was worth. A tiny fraction of minimum wage.

Don’t give up the day job, Al! 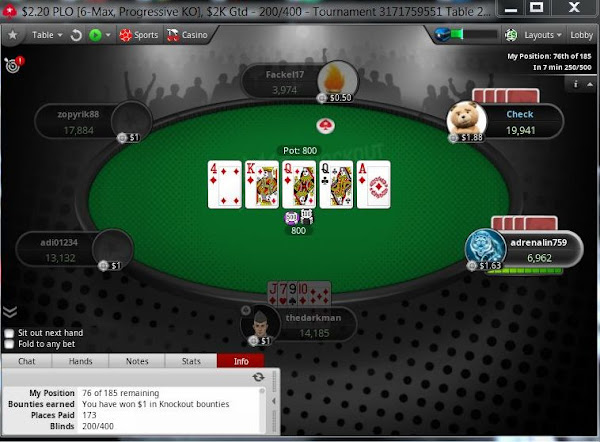 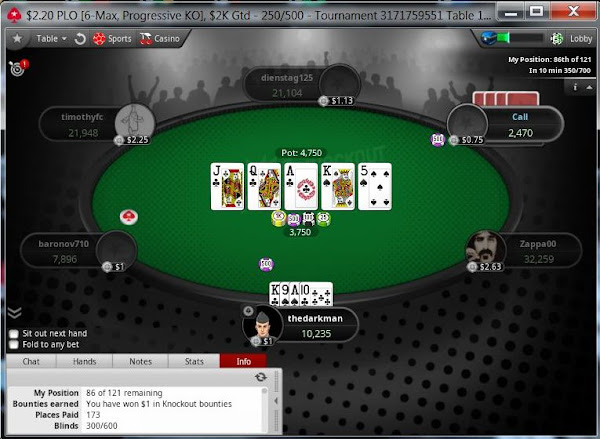 Posted by thedarkman at 12:38 No comments:

Actually, it had never left. The screengrab below is from the two dollar PLO KO. I cashed again tonight, but was quite short stacked both before cashing and after.

After the turn, I called for the 3, and it came. No big thing, but it got me through to the next level.

I’ve actually lost count of the number of times I’ve done this. Okay, it doesn’t always work or I’d win the tournament every night, but it works a lot more often than it should. 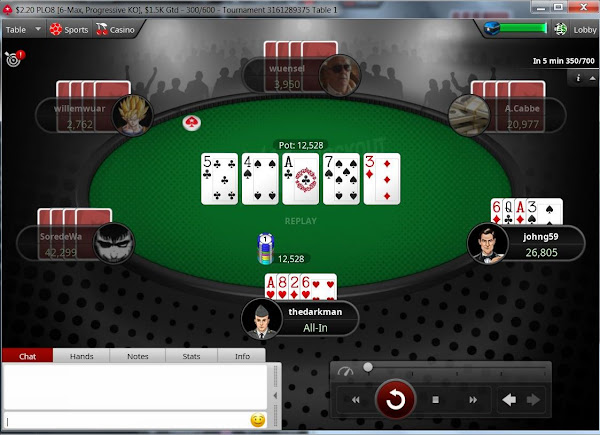 Now if only it would work on the National Lottery!

Posted by thedarkman at 13:06 No comments: