The Last Time I Saw Tony

The screengrab below is from an e-mail that arrived on the 22nd of last month. It is clearly incomplete, but what is not so clear is that it was long overdue because the author had been dead four years by that time.

Anthony Hancock - Tony to his friends but AH to me - died June 11, 2012. I can only guess at what happened, but presumably the e-mail account from which this message was sent has now been long closed. His phone number no longer works, and although his domain - Historical Review Press - has been taken over by Simon Sheppard - the company he founded with his late father is also long gone.

If you read about AH in the mainstream or anywhere slightly to the left of the Monday Club, you will find nothing flattering about him, and much that is deeply unflattering. For some time after our initial acquaintance, I wasn’t that impressed with him either. The sentiment was mutual, but I realised shortly, as did he, that this mutual contempt had been engineered gratuitously by someone we’d both been kind to in our own different ways, and who had repaid us by trying to set us at each other’s throats.

After this individual overstepped the mark, we both realised we’d been played, and although we were never friends with a capital F, we did reach the point where we enjoyed each other’s company. I owe AH a lot; he did some printing for me including one ill-fated project (that he actually contracted out) which left him seriously out of pocket, and one of my pamphlets he printed totally for free. I can’t remember at this distance if this was Holocaust Revisionism After Irving v Lipstadt or The Man Who Invented Racism, but he certainly printed one for free, and the other for a fairly nominal fee.

It was because of AH that I went to Tehran where I delivered a paper on the forbidden subject; I also assisted him albeit belatedly as McKenzie friend in the ludicrous Tosspot Trial which saw him stitched up by a deranged lawyer, a barrister who looked and talked like a pig, and a judge who was out of the Ark.

The photo below is rather sad looking; the last time I saw him - at a political meeting - he looked even sadder. I feel a bit guilty over that because I tapped him for twenty quid, I remember not what for. I realised later that by that point he was a broken man, his horrible common law wife having kicked him out of the house, and he was I am reliably informed sleeping on the floor of his printworks. Even so, he would not have died prematurely at 65 had be followed his doctor’s orders. 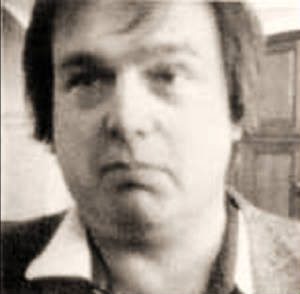 It was a sad end for a man who had been demonised by people who on the one hand painted him as a bigoted and quite mad conspiracy theorist while at the same time conspiring against him and everything he stood for, even dragging him into court over the printing of a boring satirical pamphlet while turning a blind eye to or even attempting to justify the crushing of a nation and the mass murder of its people, including its children.

In the grand scheme of things, AH was an important person, and if our race still exists two hundred years from now, history will be a lot kinder to him than his contemporaries.