Can You Fold The Nuts?

You’ll never make a poker player unless you can make a big lay down, but can you fold the nuts? If you are a dedicated hold ’em player, you may find it difficult to credit you would ever do that, but consider the following. Playing a tournament you’ve had a good run and are now on the final table. Sitting in the big blind, you are dealt pocket rockets; the first player raises, the player in third position goes all-in with his short stack, the next player re-raises, and the big chip leader in the small blind comes over the top. What do you do? Sure, you are a big favourite against any of their hands heads-up, but one player is all-in already, and if the other two call and one of them gets lucky, you will be crippled. If one of them not only gets lucky but has more chips than you, you will be busted out, and if the big blind gets lucky...The sensible thing to do is fold, that way you are almost certain to finish one place higher, and if the other two call only for the small blind to flop a house of kings...so it is not simply a fold, but an easy fold. Now how about folding the nuts on the flop?

If you are playing Omaha, either straight Omaha or hi-lo, and especially pot limit, this is something you need to be able to do. Let me give you two examples from actual play. The screengrab below is from a hi-lo cash game played in the small hours of August 14, 2013. In the big blind with a total garbage hand I flopped the nuts, but it is a hand that cannot improve. To begin with, it is not totally impossible that another player could also have flopped the nuts, but how many ways can I scoop? Come to think of it, how many ways can I win even the high? Any club makes a potential flush, the board pairing makes a potential house, and a 6, 7 or 10 makes a bigger straight. Even if I hit quads runner, runner, I can win only half the pot. I did the sensible thing, and folded. Look at the final board, there is no lo, and a potential flush, a plethora of houses, and quad 8s beating my humble straight. The only sane thing to do is check the flop and fold to any bet. 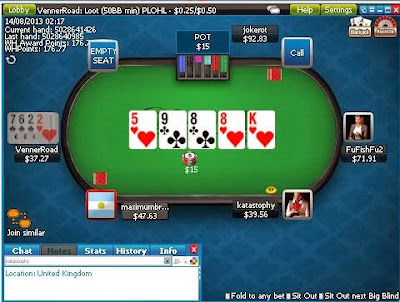 The next two screengrabs are from a hi-lo tournament played on November 27, 2013. Again, I flopped the nut straight, and this time I made a small bet; as you can see there was a minimum raise followed by a not-so-minimum re-raise. I let the hand go without hesitation, and would have even if this had been a hi only tournament. To begin with, another player or two of them could have the nuts as well and a redraw. 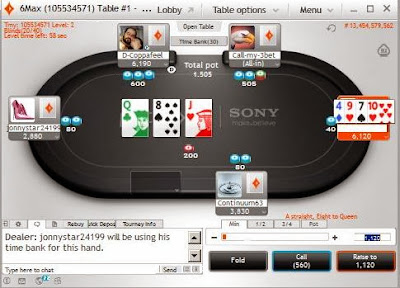 The next screengrab vindicates my decision. As things turned out, I was actually ahead on the flop, but how many ways could I win? If the board pairs, I lose to a house, and two other players - one with a garbage hand - had draws to a bigger straight. One of them got lucky, and scooped. I cashed in this tournament, and clearly would not have had I been unwilling to fold the best hand on the flop. This is often a painful decision to have to make, but the alternatve is almost always more painful. By giving up a small amount of money or chips you are in fact saving a lot more. 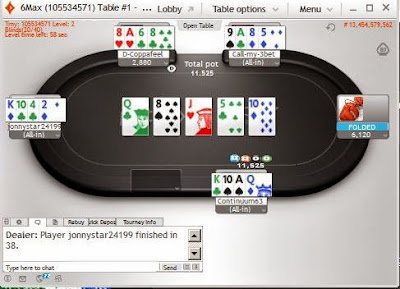