A Game For Morons And Broken Hearts

I said a long time ago that poker is a game for morons and broken hearts. I was referring specifically to no limit hold ’em at the time, but I included limit hold ’em too.


To that you can add Omaha, the game which has seen more money lost with aces than won with them. And Omaha hi-lo, especially at pot limit. There are three forms of poker in which skill counts for something: stud hi-lo, razz, and (I thought) 5 card stud. After last night’s performance, I am not so sure about 5 card stud either.


I ’ve played 5 card stud on and off for years, far more off than on because it is a rarity. Previously I’ve played at pot limit and I think maybe one or two tournaments at limit. I did okay with it and am definitely showing a profit over the years, albeit a tiny one on account of its said rarity. The only place you can play 5 card stud at present is Ladbrokes. There was another site, but that is long gone. Recently, Ladbrokes introduced a small no limit tournament called Hey, Stud (€50 Guaranteed). No limit anything is a  dangerous game but what the heck, with a €.20 buy-in, I thought it was worth a shot. I played it the night before last - October 30 - but I had truly terrible cards and came nowhere. All the same there were 4 places paid, so I decided to give it another shot. Last night it paid only 3 places, a massive difference (in my book at any rate), but I got off to a fine start, and at times the cards were nothing but spectacular.  Here are a few screengrabs. This was a slow hand so there was very little in the pot even though I got paid, but how often do you make a flush at 5 card stud? 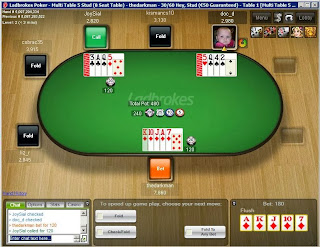 Then I made a full house, and got paid properly; how often do you make a house at this game? 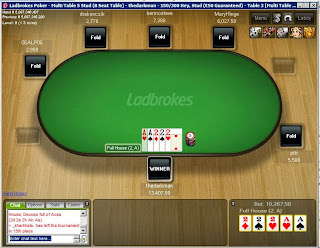 Then I won a big pot with 3 kings, and was clear chip leader. 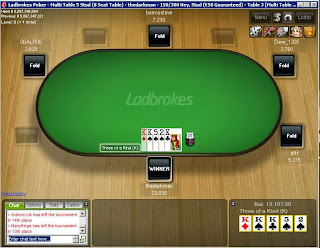 What could go wrong? Enter the moron. Dealt jacks, I raised. It’s always a good idea to raise with a pair at this game - unlike at hold ’em. This time I was faced with a reraise. As I was clearly ahead, I whacked it all in, and the moron followed. I was expecting him to have a pair of 9s, but no, he had 9-10. No, he did not misread his hand, and he was not on tilt, he was simply a moron. And when the cards were dealt, after making 2 pair, I stared in fascinated horror as he filled a gutshot. 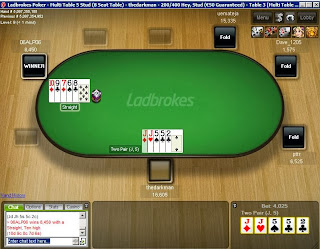 By this time, although still chip leader, I had that sinking feeling. As things were, I got lucky and was soon among the chip leaders including briefly the leader. I made another flush, heads up, and picked up a reasonable pot, and I had some real luck when bringing in with a deuce a guy flat called me with jacks. I hit a queen, and whacked it all in. Obviously thinking I was bluffing, he called. 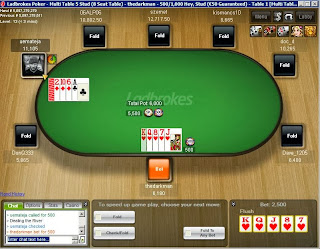 Finally, after the moron had given away all his chips, we cashed, and again I got lucky, finishing runner up. I was very unlucky with the last hand, losing with back to back 5s, the other guy pairing his 3rd card and winning the pot and the tournament with a pair of 6s leaving me with the  €15.00 runner up prize. I have no complaints about that, and will be giving it a third shot tonight whatever, but that hand with the moron proves yet again as if it needed further affirmation, that poker is a mug’s game, even those variations in which skill counts for something. 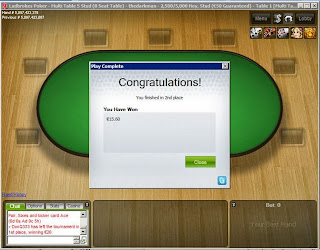