The Ghost Of Harold Covington

The recent, failed sovereign state of CHAZ in the Pacific Northwest would have been welcomed by the late Harold Covington, although it is doubtful if any of its citizens would have welcomed him.

Harold died two years ago this month. Unless you are of a certain age and/or have an interest in following the political fringe, you will probably not have heard of him, but until his untimely though not unexpected death at 64, Harold Armstead Covington was America’s and arguably the world’s leading National Socialist theorist. He wasn’t simply a Nazi but a white supremacist; as pointed out in a previous article, the two ideologies are not the same.

Harold though was the full ticket: he hated Jews with a passion, while blacks were beneath his contempt; apart from Barack Obama, he didn’t consider them at all. 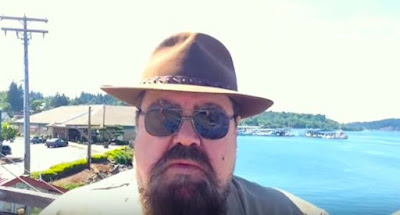 It isn’t too difficult to find biographical material about Harold on-line, but bear in mind that this kind of hatred is generally a two-way street, so don’t expect to find anything objective about him written by Jews, especially those acknowledged smear merchants the ADL and the Southern Poverty Law Center.

In his youth, Harold was a comic book Nazi, complete with swastikas, uniform, and Roman salute - the classic “Sieg Heil!”

While still a teenager, he joined the National Socialist White People’s Party, the successor to the American Nazi Party that was founded by the charismatic but sorely misguided Lincoln Rockwell, who was assassinated in 1967.

After a stint in the US Army and working on the permanent staff of the NSWPP, Harold moved to South Africa and then to Rhodesia where he claimed to have served with the Rhodesian Army. Some say he didn’t serve with Rhodesian forces at all. He probably did, but Harold was not averse to a little embellishment, whether about his political enemies or himself. What isn’t disputed is that he was deported from the country due to his political activities.

It probably came as a shock to Harold that the whites of South Africa and Rhodesia did not regard themselves as “racist”. Although Rhodesia was ruled by whites, there was no apartheid as such, and what isn’t generally known is that even South Africa had strong “race relations” laws.

On returning to the United States, Harold continued his political activities, running for Attorney General of his native North Carolina on the Republican ticket but as an open Nazi. Although he didn’t win, he picked up an impressive share of the votes. His tenure with the NSPA is best not mentioned, but it doesn’t show him in a bad light. After that, he travelled to the British Isles spending time in both England and the Irish Republic, where he married a woman who had two children, and soon added two of his own. He also made occasional trips to Northern Ireland where he developed a reluctant admiration for the IRA, not for their goals, but their methods. And he lived on the Isle Of Man for a while.

While in Britain, he was accused of founding the short-lived but violent Combat 18. This allegation came from Gerry Gable, a man for whom the truth is a distant stranger. There is no evidence that Harold was ever involved in any violent political action himself in the UK, or that he incited it, and when finally he returned home, he relocated to the Pacific Northwest where, having found his true vocation, he began proselytising to his kinfolk through the new medium.

Although he wasn’t flush with money, Harold appears to have secured some backing for his new outfit the Northwest Front, which included a regular podcast. His intention was to implement the Butler Plan, the brainchild of Richard Butler who died in 2004. Butler was a brilliant man, an aerospace engineer, but he was attracted to Christian Identity, a movement that might be described as the white equivalent of Islamism without the terrorism. Butler founded Aryan Nations, a so-called church, and his idea was to create a separate homeland for white Americans. Harold summed up his version of the Butler Plan succinctly as “We will Create a White Homeland in the Pacific Northwest”.

Harold was a scholar of history, and in his own way a profound intellect. His Northwest novels and non-fiction writings can be found at the Internet Archive. The former are also available in audio format, and were written largely to inspire his younger followers. The exception is his last novel, Give Me The Night, which he published under the pseudonym Martin Scanlan. This was written purely for pleasure.

Before the current wave of hysteria, Nazis were regarded as a curiosity by certain media outlets, something Harold eventually realised. Many years ago he was contacted by a producer or some such who wanted him to appear on a talk show. When he agreed, the guy asked him to turn up in swastikas and jackboots. Harold told him politely “We don’t do that sort of thing anymore”, or words to that effect. The guy said he would get back to him, but according to Harold, he never did. Clearly the new Wicked Harold had to be taken seriously unlike the Nazi clown of old; best not to give him what Margaret Thatcher called the oxygen of publicity. Who knows what impressionable minds he might corrupt?

Although Harold’s anti-Semitism was quite virulent, for an authoritarian he had some surprisingly Libertarian ideas. While homosexuality would not be tolerated in the new North American Republic, neither would the church as it exists. There would be freedom of religion, but no paid sinecures. His greatest Libertarian tendencies though manifested in his views of foreign policy. Like most of us of a certain age who lived through it, Harold was horrified by the 9/11 attacks, but had he rather than George W. Bush been running the country, there would have been no invasion of Iraq or any of the weapons of mass destruction nonsense that was to follow. He was totally opposed to American foreign policy in especially the Middle East, and to the excesses of the FBI.

Harold’s political enemies sought to portray him both as a clown who was not to be taken seriously, and as a greater threat to America than those who were actually destroying it. This cognitive dissonance can be found in all “anti-fascist” and far left “monitoring” groups. Since his death, his successor has continued to run the Northwest Front, but Harold is a hard act to follow. Harold was the kind of man who inspired fierce loyalty, and, whatever his politics, he was a good friend, including to many who never met him.

Though they rejoiced at his passing the same way they laughed at his life’s work, we saw with CHAZ a momentary vindication of his dream, albeit on an extremely small scale, because no sooner had they taken control of these six blocks of Seattle and declared their republic, what did these professed anti-racists do? They erected a “wall”, after condemning Donald Trump for years for doing the same thing, and then they segregated! 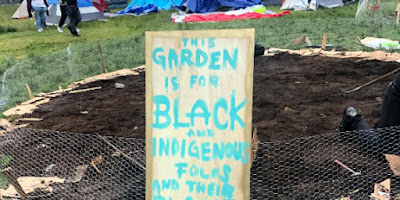 Yes, these anti-racists who were so offended by apartheid, Jim Crow, and legally enforced segregation, applied the principles of intersectionality relegating whites to the bottom of the food chain on account of their “oppressing” everyone else. In short, they have come full circle, from being outraged at segregation to being outraged at integration. This shouldn’t be so surprising, because some American universities have permitted or even encouraged segregation in some areas for years. What this does reveal though is that many of these left wing protesters don’t really understand what they are protesting against or lobbying for. Mark Dice and other pundits have demonstrated this by interviewing anti-Trump and similar protesters. Often they are unable to articulate even in general terms what it is that offends them.

The same thing cannot be said of Harold, and as he looks down from Valhalla, he will surely take an ironic pleasure in realising that if only for the briefest moment in time, his dream had come about, and it was his most vociferous enemies who enacted it.