The “Lingua Franca” Of The Universe, And Its Evolution

I remember what might be called a trick question from when I was at school back in the 1960s: which language is most widely spoken? You were meant to answer English, only to be to it was not English but Mandarin Chinese. I found that odd because the only place Mandarin was spoken was China – and the various Chinatowns dotted around the world – while English was spoken everywhere, including in outer space.

During my misspent boyhood, before I discovered bird-nesting, then chess and then fatefully poker, I was a voracious devourer of comics: Marvel, DC, American, British and other. Even the aliens in these comics spoke English. Sometimes an alien would offer an explanation for this: “I mastered your language while listening to the BBC”. Well, maybe not the BBC. English is not simply the lingua franca of the known universe but of the entire universe.

Today there is probably no country in the world where it is not spoken to some degree, and as might be expected, some foreigners put us to shame with their use of it. When Harry Potter – the real one – said England’s greatest contribution to the world was law, he might have added that its ubiquitous contribution was its language.

That being said, not a few words of distinctly non-English origin have found their way into the Oxford Dictionary over the years. Words like pyjamas have of course been with us for a long time, but other words like ayatollah, halal and intifada came into common use much more recently. At some point I am going to have to stop italicising them.

The language has changed too, often in subtle ways in recent decades. Back in 1509 when Henry VIII wrote Paſtyme wt good 9panye, it is doubtful if he would have considered that 5 centuries on, the title of his greatest song would have been unintelligible to his countrymen. But look at the scan below, the front cover of a long defunct magazine called Britain To-day. Does anyone hyphenate to-day today? 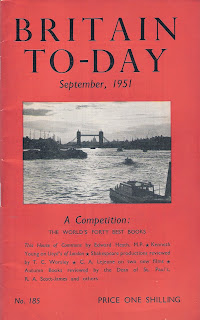 A few years ago when I was doing some research at Colindale I found a report in the South London Press that alluded to Venner-rd., Sydenham. Who spells an address like this today?

At one time, the word on-line was spelt thus. Today, I am almost the only person in the world who hyphenates it.

On the off-chance that Man still exists five hundred years from now, what are the odds that the language we speak today will be just as alien to our descendants as is the language of Henry VIII to his?